The coastal California chaparral is surprisingly noisy.  It is a densely populated place, dry and full of debris with many year-round inhabitants.  In the morning and evening birds warble, coo, chirp, and call to one another.  At night insects buzz, owls hoot, and coyotes hold long-winded conversations.  During the day crows and scrub-jays go about their errands chatting to themselves while hawks soar high above screaming at the sky.  On hot days seed-pods pop open, sending a tinkling rain of potential life through tough branches to the ground and all the plants talk when the wind blows.

Below all, down amongst the leaf-litter and rocky debris, little things, lizards, insects, mice, and small birds scurry back and forth, sending out a diminutive cacophony of rustles and scritches.  The most common of these noise-makers are lizards.

During the summer months the lizard I see most often is a lean, elegant Teiid lizard, the Coastal Whiptail (Aspidoscelis tigris stejnegeri). 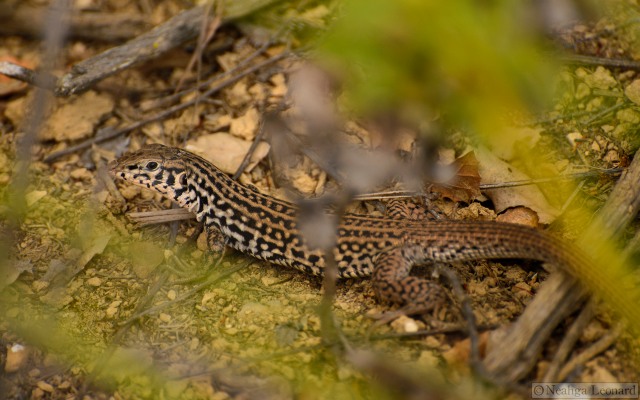 These feisty fellows spend much of their time hunting in leaf litter and gravel, often along the margin of vegetation clumps.  Like many lizards, they have a twitchy, wind-up-toy manner of moving characterized by rapid, jerky motion followed by periods of complete stillness.  Their long tails and powerful legs churn the ground as they move, generating more noise than seems likely considering their size.

A full grown coastal whiptail can be a foot long including the tapering tail from whence their name is derived.  For California this is a decent sized lizard, but nowhere near as large as members of this family of lizards, the Teiidae, can grow.  In South America relatives of the California Whiptail, the Tegu (Tupinambis) lizards grow to four feet and are key predators of young cayman (a large alligator-like predator).  Teiid lizards look and behave very much like monitor lizards.  This may be one of the reasons I am so fond of the whiptails; it is easy to scale them up in your mind and imagine the chaparral landscape as a realm where buffalo sized lizards roam the earth.

Unfortunately, or perhaps not, this is not the case.  Rather than dinosaur sized tracks pressed in the ground, the dusty portions of trails hold the slender marks of dragged tails and little lizard feet.

Lizard tracks in the sand

Like snakes and monitor lizards the Teiid lizards have forked tongues.

The tip of the Coastal Whiptail’s tongue is forked, but it is difficult to see

The question of why certain reptiles have forked tongues has led to a wide variety of strange ideas through history, but the truth of the matter seems to be that the tongue is part of a directional chemical sensor.  The sensory apparatus is the vermonasal organ which is located more-or-less on the roof of the mouth.  Non-volatile chemicals are deposited on the tongue which is withdrawn into the mouth, depositing the chemicals onto two pads at the opening of the tongue protecting sheath.  From there the chemicals are transferred to the vermonasal organ when the reptile closes its mouth.  The difference in concentration of the collected chemicals provides the directional sense.  In essence these fellows are playing “warmer-colder” in pursuit of their prey.

Like many lizards the Coastal Whiptails appear able to drop their tails to distract predators and regenerate new ones.

The fellow above appears to have lost its tail and be in the process of growing a new one.  The tail is much shorter than I would expect for a lizard of that size, the tail appears shortened and slightly blunt, and both the scales and coloration are very different from elsewhere on the lizard’s body.

These lizards are extremely wary, crossing open ground at high speed and fleeing when you get too close.  They have a habit of running to cover, then freezing and watching you closely, almost suspiciously.

A suspicious whiptail watches me from cover

The whiptails are far from the only lizards in the area.  Fence lizards search for high points from which to display and guard their territory: 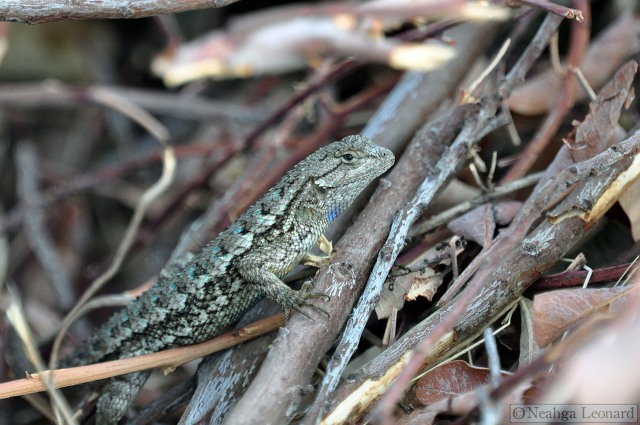 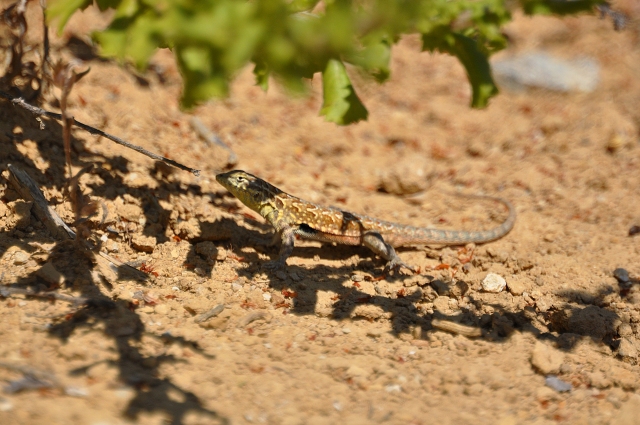 Side Blotch Lizard keeping an eye on me

And Large Alligator Lizards (another of my favorites) hide in the damper areas:

A quiescent Alligator Lizard rests in my hand

There are others as well, but I don’t yet have photos of them.

I find lizards particularly interesting and evocative.  Despite being less closely related to dinosaurs than birds, they conjure that ancient world to mind.