Of all birds hummingbirds are one of the most fun to watch.  They are fast, colorful, and tiny, the smallest ones roughly the same size as a large moth or butterfly.  They are probably best known for their maneuverability.

Anna’s Hummingbird (Calypte anna) coming in for a landing. Note the small tail, the curve of the body, and the large wing muscles.

These birds are compact and extremely well muscled.  Their tails are short and flexible, notice how the tail of the Anna’s Hummingbird in the above photo is curved to the side and folded to cup the air to assist in guiding the bird in to its landing spot.  Their wings are short with thick muscles covering the limbs and have a range of motion far greater than that of other birds.

The name Hummingbird comes from the noise of their wings beating at 25 beats per second, about 1500 beats per minute. This high wing-beat and the extraordinary wing flexibility allows hummingbirds to hover far more effectively and energy efficiently than any other bird.

To hover they flap their wings in a figure-8 pattern, generating lift on both the down and upstroke.  Approximately 75% of the life of generated on the down-stroke with the remainder on the up-stroke.  The University of Texas has some nice graphs and charts providing more detailed information on how this works.

In to achieve this maneuverability hummingbirds give up the ability to glide.  In effect they have no low energy flight, they are always running at near full speed.  A 170 pound person would need to eat (and metabolize) 130 pounds of bread a day to keep up with energy output of a hummingbird.  Their energy output is so great that they enter torpor at night, a sort of hibernation.  If they did not do this the hummingbird would starve to death during the night.

Hummingbird flight characteristics are very nearly a blend of bird and insect methods of achieving lift.

Hummingbirds are generally extremely colorful, especially the males.  Like many birds this color is not pigment generated, but is the result of highly specialized feathers light refracting feathers.  Think of oil on water, that rainbow sheen that you see when light reflects from it.  Birds use the same technique, but in a far more specialized way.  Rather than an undifferentiated rainbow of colors the micro-structure of the feathers refracts only specific colors.  The natural color of the feathers is a dark brown, almost black.

I know I’ve used this photo before, but it illustrates the refraction vs pigment issue well.  The bold purple-pink behind the bird’s eyes is the color we associate with the male Anna’s Hummingbird’s head and gorget (the throat portion).  The dark, almost black, feathers are at the wrong angle to reflect the light and show the natural dark color of their pigment.

The tree in these photos is a Tobacco Tree (Nicotiana glauca), not native to North America, but native to South America, a place where there is a stunning variety of hummingbirds.  This tree and hummingbirds have a long relationship and have mutually evolved to reinforce that relationship.  Hummingbirds and may other birds and insects (and not a few mammals and reptiles as it turns out) drink nectar from flowers.  Not everyone who drinks the nectar will pollinate the plant, thus special relationships evolve.  Plants with long tube-like flowers (penstemon, humming-bird sage, tobacco, monkey flowers, heliconia, etc) are specialized to provide nectar for animals with long tongues that can reach the nectar. 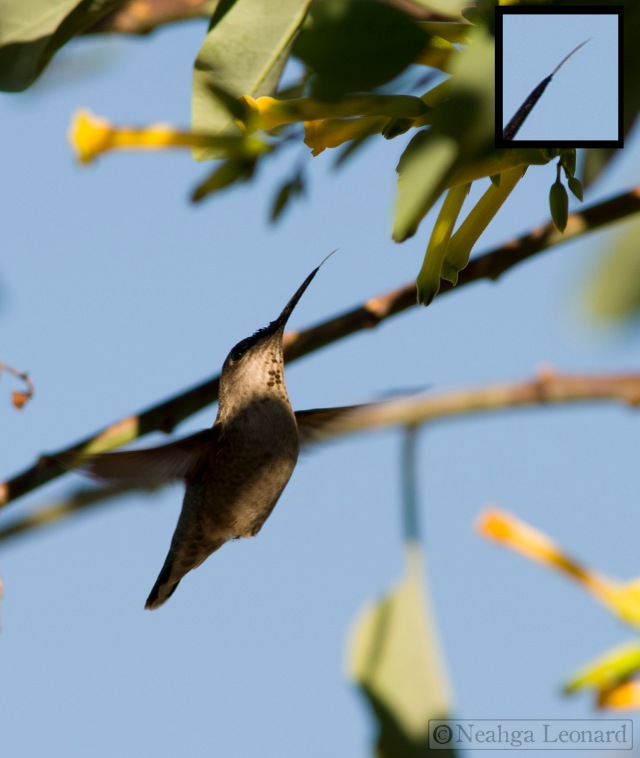 Hummingbirds not only have long, narrow beaks, they have long, feathery tongues with which to lap up nectar hidden deep inside the tube-like flowers.  As they drink the plant deposits pollen on the beak and sometimes the bird’s head (two photos up you can see the pollen discoloring the hummingbird’s beak).  The next flower the bird visits gets a little pollen from the previous flower and the plant is happy.

A quick look at the shape and color of flowers will often give you a good sense of what type of animal the plant relies on for pollination. 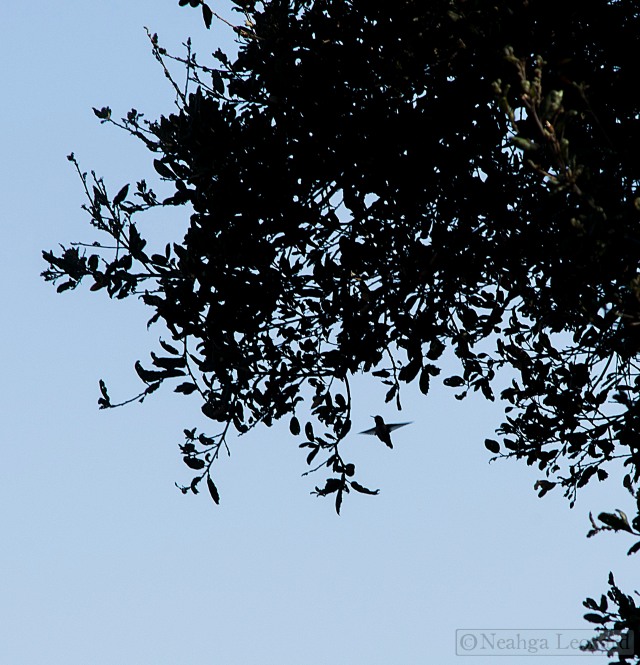 Hummingbirds need protein as well.  Some, such as the Anna’s Hummingbird, catch insects in flight, many others raid spiderwebs for insects.  Here in North America this is a relatively safe prospect, but in parts of South America there are spiders that will happily catch and eat a hummingbird and spin webs more than strong enough to trap the birds.

Hummingbirds have such a need for vast quantities of high energy foods that they are often extremely territorial, engaging in vicious fights and high speed chases.  Like most animals they would rather warn opponents off than waste energy fighting them.  Different species have various methods of letting others know how tough they are. 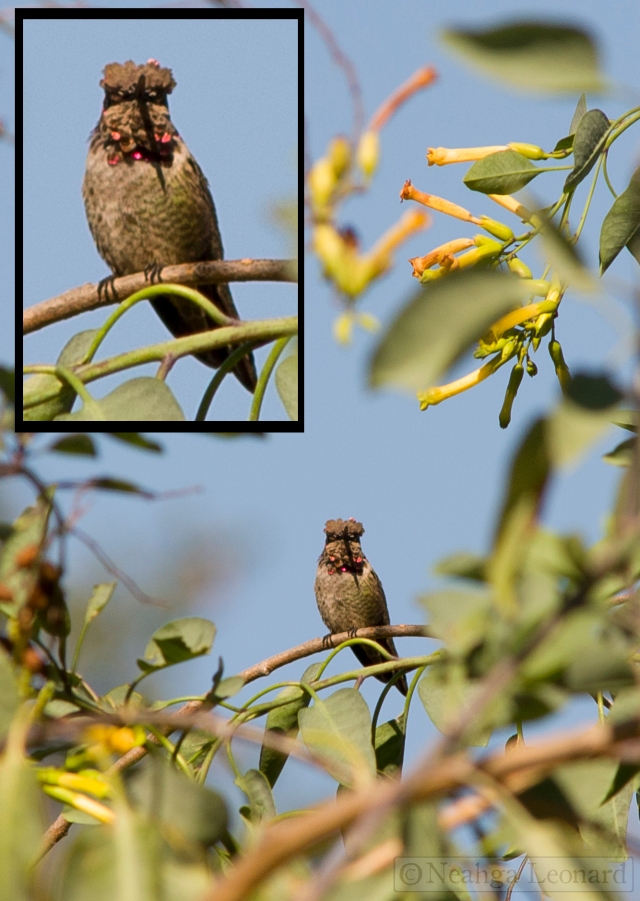 Anna’s Hummingbird staking out its territory

The little fellow above is marking out territory by fluffing out his head feathers.

One of the most amazing things about hummingbirds to me is that they migrate long distance, some species crossing the Gulf of Mexico in one long flight with no food.  At the shortest distance this is a flight of 480 miles, many birds fly closer to 600 miles to make this open water trip.  For a bird that only weights several ounces, cannot glide, and needs to eat constantly this is a truly remarkable voyage.

On a final note, hummingbirds are far more intelligent than most people realize.  Their memories are phenomenal, allowing them to keep track of individual flowers within their territories and when they were last visited for nectar.  They have the largest brain-to-body size of any bird.

Of all insects there are few that capture our attention and interest the way dragonflies do.  They have, perhaps, the coolest, most evocative name of any group of insects: Dragonfly.  In English there are a great number of other common categorical names: Devil’s Darning Needle, Snake Doctor, and Ear Cutter among others.  Many of these names come from the mystifying apparent fear of nature that crops up over and over in European views of the world.  Many European cultures viewed dragonflies as sinister creatures, servants of the devil, in league with other evils such as snakes and bats.

Other cultures, often more agrarian ones, had a far more benign view of dragonflies, based, perhaps, on the recognition of their fundamental role in controlling populations of pest insects of all sorts.  An archaic name for the Japanese Islands is Akitsushima (秋津島), the Dragonfly Islands, where dragonflies symbolized courage, strength, and happiness.  For some native American tribes dragonflies symbolized clean, pure water, swiftness, and agility.  In the modern world dragonflies are good indicators of environmental heath, indicating a robustly functioning ecosystem. 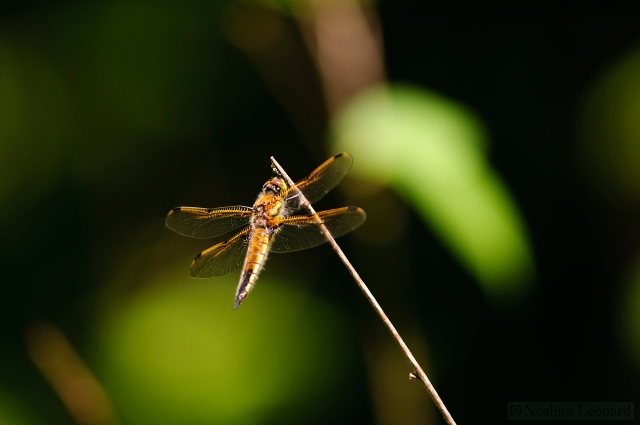 Dragonflies and their close relatives, Damselflies, come in a dazzling array of colors and patterns, ranging in size from less than  an inch long up to the South American Megaloprepus caerulatus with a wingspan of over 7 inches.  The largest dragonfly we know of is from the 300 million year old fossil Meganeura that had a wingspan of over 2 feet.

Dragonflies are powerful hunters, both in their nymph and adult stages.  Dragonfly nymphs are aquatic and prey on any animal or insect they can grab with their claws or their extendible jaws.  Insects, small fish, tadpoles, and small amphibians are all food for these voracious predators.  The nymphs are large, and, in turn, are prey for a wide range of other animals, insects, birds, and fish.  Elva Paulson has some wonderful watercolors of a dragonfly emerging from its nymph stage.  Humans are included as predators, many Asian cultures eating both dragonfly nymphs and adult dragonflies as delicacies.  One of the most tasty things I’ve eaten (from a long list of foods most people would consider to be unusual) was a plate of deep fried dragonfly larvae.  Absolutely delicious.  In Beijing I would sometimes find adult dragonflies candied in liquid sugar, their wings crispy with the hardened sugar.

The adult phase of a dragonfly’s life is short, in temperate climates only the length of the summer.  This is their mating stage and it takes them between 2 months and 6 years living under water to reach this stage.  Dragonflies are extremely active during this mating phase and must eat often.  They have enormous eyes giving nearly 360 vision, incredibly swift reactions, fast, powerful flight, and wicked barbs on their legs to assist capturing insects in flight.  The inset above shows these barbs.

The common names of dragonflies often reflect their speed or their abilities as hunters.  Meadow-hawk is one of my favorite names, and watching one dart away to catch an insect and return to its roost to devour it definitely brings hawks to mind.

Dragonflies are powerful fliers.  They have been clocked at over 35 miles an hour, fast enough to get a speeding ticket in a school zone, and, like hummingbirds, can fly forwards, backwards, sideways, up and down, and hover.  Their backs are sloped where their wings anchor, placing each pair at different heights, allowing for tremendous wing mobility.  Some species of dragonfly migrate, but the scale of some of those migrations has only recently been realized.  One dragonfly species in particular, the Globe Skimmer (Pantala flavescens) flies from India to Africa and back, island hopping cross the Indian Ocean, making open water crossings of nearly 1000km (620 miles) between island stops.  The only places they can breed are at the Indian and African ends of the migration, many of the islands they use as stopover points do not have sufficient freshwater for dragonflies to breed.  This is a stunning feat of flying for an insect and may be a behavior that evolved as a result of plate tectonics splitting India and Africa apart, eventually thrusting India into Asia.  If so, this migration could have begun 135 millions years ago.  Unfortunately, we have no reliable way of telling if this is the case.

Last year was a good year for dragonflies in Vermont, and this year looks like it is shaping up to be a good one as well.  The ecologist in me cannot help wondering why and one idea is that it may be linked to the calamitous drop in bat populations as a result of white-nose disease, a fungus that infects hibernating bats, weakening and eventually killing them.  It may be that adult dragonflies have more to eat with fewer bats and a greater percentage of them are surviving through the summer.  There is a historical precedent for this sort of boom in insect populations.  During the Great Leap Forward, Chairman Mao promoted a policy of killing off all things he thought were eating grain, birds amongst these.  With the crash in bird populations in China the insect population exploded.

Unidentified dragonfly – maybe a Darner of some sort

I am happy to see the dragonflies here.  Their presence means that the water is clean, we will have fewer mosquitoes, midges, and black-flies, and they are extraordinarily beautiful creatures.

Three-hundred twenty-five millions years old and going strong.  They have it figured out!